Creating an A.I. (with Unity)

This tutorial will focus on the conception and creation of an Artificial Intelligence. While the implementation is aimed for Unity, the whole theory can be applied for any other game.

All concepts discussed here have been learnt by our team during the prototyping stage of Radiant Blade and has reached a production-ready state.

Why an artificial intelligence?

Before diving into the technicalities, it can be good to take a step back and to wonder why we actually want an A.I. for our game.

A worthy game is a game that you can play with and that deliver entertainment. So our A.I. has to be playable with. It has to be a companion, something the player can interact with in a valuable manner.

Now, obviously, a game that is only fun won’t be an amazing game. A game will also need to be cool, or meaningful, or artistic. But for our A.I., we want entertainment, so let’s narrow this concept further.

The team has spent some time thinking about it, and our conclusion can be summarized by a single word: learning. An entertaining game is a game where the player gets to learn concepts and gets to exploit them.
Entertainment is born from that little spark of curiosity that bugs your mind once you notice something new, and it growths over and over until you fully understand the novelty.

Otherwise said, an entertaining A.I. must be learnable. Simple as that.

From this small idea suddenly emerges a wide understanding of all A.I. in all video games, from Mario to DOOM, from World of Warcraft to Binding of Isaacs.
If you analyse them, you’ll find out that they are all predictable. Not necessarily deterministic as some randomness may be involved, but predictable nonetheless.

And from that, a new question quickly arises. How do you create a predictable A.I.?
Short answer: with state machines.

A state machine is a mathematical tool that contains states and transitions.

Within a deterministic state machine, you are at one specific state, and when comes the time to move, you follow one of the possible transitions to then arrive into a new state. Transitions may be subject to conditions, with a state being reachable only if, say, you have a specific spell available.

The good thing about state machines is that they are both expressive and predictable. Say that your states are concepts such as “attack”, “be hit”, “run to target” and “flee”, you could create a state machine that modelizes the basic behaviour of an A.I with a few transitions:

Notice that the A.I. we just crafted can be described with a few sentences:

It’s a good thing, it means that the A.I. is simple. Simple is good. If at some point you start to fail describing your A.I. simply, it probably is a hint that you need to take a step back.

There are three broad approaches for this:

Since state machines are a very well known tools for video games, I would not recommend doing it yourself. It has already been done over and over, and except if you want to learn how to code one, you can just get something already working.

An alternative is to use the the built-in Animator of Unity. While the name may be confusing, it’s actually a state machine that happens to play animations. But guess what? You are not forced to have animations in the Animator, and if you don’t, it behaves exactly as a state machine would.
So, it’s both really fast and ergonomic to use. We approve.

The last possibility is to get an asset from the Unity Store. We personally didn’t try, and didn’t feel the need to, but we are convinced that there should be many assets that would do just as good as Unity’s Animator.
If you personally use one that has notable advantages over the Animator, don’t hesitate and tell us about it!

You may already have been using the Animator for standard animation within Unity, but here we are going to rework the different concepts for our purpose.

Let’s go through it.

Usually, the states of the Animator contain an animation. It won’t be our case, it will instead be linked to a piece of code describing a behaviour.

To illustrate it, let’s take a look at the Game Object defining our archer:

The children of “Behaviours” are A.I. behaviours. Basically, they are small controllers that will take ownership of the Archer when their corresponding state is active. 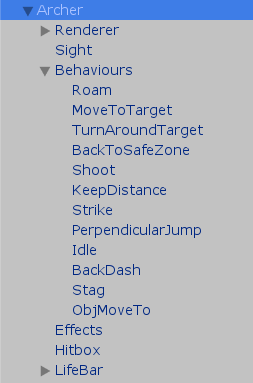 When the “Shoot” state is active, so is the “Shoot Behaviour” script for our Archer.

Don’t forget that this is state-driven. It’s the “Shoot Behaviour” that notifies the Animator when it is finished. The built-in blue progression bar of the Animator can be confusing, but it’s really only visual.

An A.I. is a responsive system. Something that adapts. But adapts to what? Well, to the player and to the environment of course!

Now, an important conception point. When using the Animator in a traditional way, most of the state transitions are done because the associated animation ends. For an A.I., a state is a behaviour, it holds game-logic for a non-defined duration.

To compensate, we are using two variables whose purpose is to notify the end of a state: “behaviour_ended” and “behaviour_error”. It’s basically an output from the states that says if they ended with success or in error.

The transitions define the change of behaviour for our A.I: “Once I’m done walking to the target, what do I do?”

One thing you may not know about Unity’s Animator: the transitions are ordered. One specific transition will be evaluated first, and only if its associated condition is false will the second transition be evaluated.

This small feature is wonderful, because it allows us to design the A.I. as a central brain that make an educated choice based on prioritized possibilities.

Remember the Archer A.I. that we showed some chapters ago? Notice how orderly and centric it looks? Well, the “Neutral” node that you see is what we call a decision hub, here is the story that this hub describes:

The wonderful thing is that each individual transition is extremely simple: it sums up to a single test, or even not at all. This is possible because all the information is carried by the fact that the previous transitions were necessarily false!

From this point forward, you should have a good grasp of what we are doing. Notice how I still haven’t given a single line of code?

That’s a very good thing, because it means that our framework is high-level enough to be fully explained without any technicality. Once the coding part is done, designing an A.I. feels very plug-and-play.

What do we need?

Here are the tasks at hand to get our A.I. working:

Before jumping in, let’s recap what a behaviour does.

Now that we know what we actually want, let’s write it down as an API:

For the enabling and disabling part, we simply take advantage of Unity built-in methods, no need to reinvent the wheel.
That leaves us with a simple and concise API. Neat.

For the identifier, I created a method with a peculiar name: “GetBehaviourHash”. This is because of the way the Animator states are identified: the identifier of a state is the hash of its name.

So for the state “Shoot”, the corresponding identifier is “Animator.StringToHash(“Shoot”)”.

In order to clarify things and to avoid computing the same hash again and again, we can simply store them as static variables somewhere:

With this in mind, an implementation of our AbstractAIBehaviour would have something in the like in it:

We may store each hash in its own corresponding script, so “ROAM_STATE” could be stored in the “RoamBehaviour” class.
The only problem is, since we are implicitly linking each behaviour to a name, it can be bothersome to open every behaviour classes to gather the authorized names for the Animator states.

From this point forward, it’s all about writing the actual code for real behaviours, but this part is up to you, since you’re doing it for your game. All you need to do is implement subclasses of AbstractAIBehaviour 🙂

Linking the Behaviours with the Animator

We have A.I. behaviours that can be identified, listened at and enabled/disabled. Let’s make use of it.

We are going to start with a controller. Since we have several entities that are independent from each other, we need to synchronize them to get things working smoothly.
This controller purpose is to make sure that only one behaviour is enabled at a time, and to provide an entry-point to change the current behaviour.

As an aside, I know that some developers struggle to know when they should throw-in a new controller class in their game. It’s generally a good habit to think of controllers as code used to synchronize multiple smaller concepts.

This class is a tad more longer, but the code is really simple:

Now that we have our entry point, we can connect our Animator with it. How do we do that? Well, with a feature that you may or may not know, as it’s not widely used: with StateMachineBehaviour.

What does this do? Well, it allows us to plug custom code into the Animator. And guess what we are going to do with that?

We are simply going to call our AIBehaviourController when the Animator state changes.

This code is extremely straight forward, except that it deals with one oddity from Unity: an Animator cannot process more than one state per frame, causing a small delay when you have to traverse a decision hub.
Fortunately, the solution is as simple as forcing the Animator to go through it anyway by forcing an Update.

With our new class, we can finally glue things together, simply by adding it to our A.I. Animator.

In the end, we have three classes part of the framework, and subclasses plus a character controller to include the actual game logic.

Including your game logic

All-in-all, the technical solution sums up to three classes, each one very concise.

What more do we need? Well, the game itself indeed! But unfortunately, this part has to be your own.

So, what more do you need to get your own A.I.?

But at this point, it’s standard Unity code as you are used to.

If you liked this article, follow us on twitter (https://twitter.com/synnaxium) to be notified when a new article is available!

Any question? Any comment?
Don’t hesitate, we are available and will answer you gladly 🙂